Jared's first encounter with AltChat happened early in 2011.
Jared's mother, Joann and I (Uncle Danny) took Jared to the United Cerebral Palsy Foundation in San Diego. After several meetings with UCPF, Jared was ready to meet Joy, the woman who runs the office. Upon meeting Joy, Jared spent one and a half hours answering all sorts of questions. They had many different kinds of communication devices there for Jared to experience.  Moving from device to device, he answered all her questions.  At the end of the questions, Jared touched the button that said "finished." As we were walking towards the door Jared moved to another AltChat and touched the button "McDonald's", then "Fries." It was the first time Jared had ever asked for anything with a "voice"!

It was a few months later before we actually received the AltChat. I immediately, entered some phrases and pictures to help Jared along. One of the button icons had a finger pointing out of a hand and my voice saying , "You’re in trouble!"

I was excited to talk to Jared and down played the whole use of the AltChat till a week had passed by. Jared came over and was playing in my backyard when I called to him to come in the house and tell me something. He marched right in, sat down and began touching buttons really fast. “You're in trouble, You are silly, Ha ha ha." I looked at Jared and asked are you making fun of me? He repeated two more times touching the buttons in the same order while laughing at me. I cried, Jared was cute and funny and he knew how to use the AltChat!  We then knew that Jared would be able to use this device.

Soon after we discovered he could point out the icons on his device in real life! Especially the McDonalds and Taco Bell restaurants. But what would he do if we removed the icons? As a test we left everything in place - and simply had the names of things. At a boy Scout ceremony - sitting on the grass with his Aunt - he really showed us his full capabilities! All the icons had been removed from the box and Jared still knew what they where!!! He still knew Aunt Marlo, and his newest entries of his step brother and sister and how to say what he wanted.

A Couple months later when he was in the hospital waiting for dental surgery, in the patients waiting area, Jared walked over to a pretty teenage girl and asked, "What's your name?" She answered and then Jared asked, "Will you dance with me?" She said, "Yes." And they danced to Lady Gaga! Another one of Jared's favorite buttons, that plays music.

Jared's use of his AltChat has been a doorway into his soul. We all know more about him and his personality has really shined through the use of his AltChat. Jared's mother and I now know that he likes Curious George on line video games, that burritos are his favorite food.

Jared has progressed, from make grunts and yelling all day, to asking and telling us what he wants. Life has become more of a reward for all of us!  We love the button that says "I Love You, Mom."

The more we add - the more he has to talk about! It's thrilling to see him be able to communicate when he wants to. I think the challenge will be to get him to do this more. He has grown up using other forms of communication - like pulling you or pointing. Now he has to get used to what we call "his voice"! 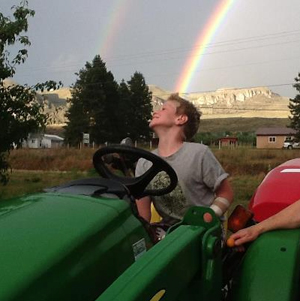 Are you the type of person who doesn't like to talk on the phone?  Would you prefer to chat with someone using your computer to get your questions answered?  If so, we have fabulous news for you!  We are so excited to announce that Saltillo is now offering a Live Chat support service!  Live Chat will be available from M-F, 9am-5pm ET.  Just go to our support page and click on the live chat button to be connected to someone during those hours.  Happy chatting!