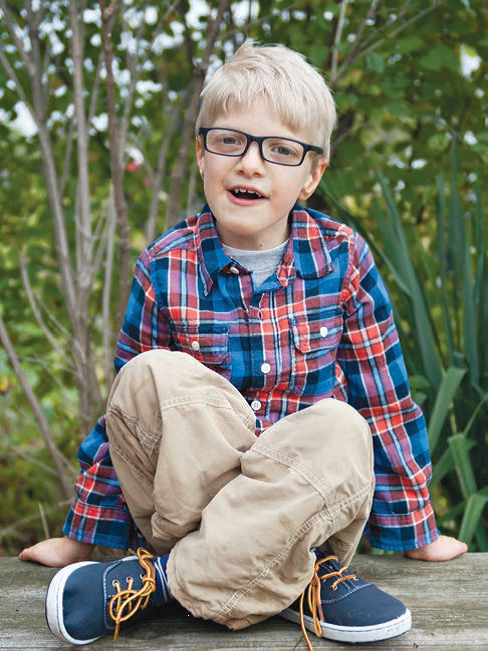 "I can't imagine living in a world where I had no say, no control, no way to express how I was feeling,” says Nikki Schueller. “Because of the NOVA chat, my son Parker does not have to live in that world.”

Parker, age 8, has what Nikki describes as a “laundry list” of medical challenges that leave him unable to speak or walk. “He is overall undiagnosed but his challenges include global developmental delay, hypotonia, migraine, GERD, Central Sleep Apnea, Failure to Thrive, Cyclic Vomiting Syndrome, Autism, Dysmotility, and seizure disorder, among others,” she explains.

The NOVA chat is a portable, speech-generating augmentative and alternative communication (AAC) device from Saltillo. Since securing the device two years ago at the recommendation of a speech-language pathologist (SLP), Parker can now “speak” to his parents, his baby brother Joseph, his medical team, therapists, teachers, and others, despite his complex disabilities.

For Nikki, enabling Parker to share about how he is feeling may be the device’s most significant contribution. “Parker has been hospitalized over 135 times,” she says. “We wanted desperately to understand where he hurt. One day, without prompting, he used the NOVA chat during a session with his SLP to tell us his head hurt and that he needed medicine. We sat stunned and then we cheered. I wanted to cry. I knew we had opened up this most important line of communication.”

Now, she says, “Parker and I talk all day. He picks out his morning television show, his snack, his drink. He tells me what hurts, what he wants to play, and where he wants to go. We talk about what time and day it is, who we are going to see, and what's on the agenda for the day.”

Parker attends Wing Lake Development Center in Bloomfield Hills, MI. He is in an SXI (Severe Multiple Impairment) classroom with other children his age. His parents chose the school because the staff’s knowledge of the NOVA chat enables Parker to be surrounded by a community of people who support, understand, and use the device all the time.

Parker also works with both school and private occupational, speech, and physical therapists. Like other kids, he enjoys swimming, bike rides, swinging, watching the Wiggles, and playing games on his iPad.

As he has become physically stronger and more skilled at using the NOVA chat, “the ‘window’ into Parker’s cognitive abilities has been remarkable,” says Nikki. “I can't believe how much I've learned about him, how fluid our conversations have become, and how shocked we've all been at some of the things he’s told us. Most important, I’ve had the opportunity to get to really know my son. Think about how powerful that is. There is no better part of my day than when Parker and I get the chance to talk.”

Finding the Best AAC Solution with an SLP’s Help

Despite being nonverbal, Nikki says Parker has always been “an excellent communicator and for the most part, we always knew how to meet his needs. We got by with a few signs, watching his eye gaze, and offering choices. We also just know Parker in a way that I can't describe in words.”

But Nikki also knew her son “needed and 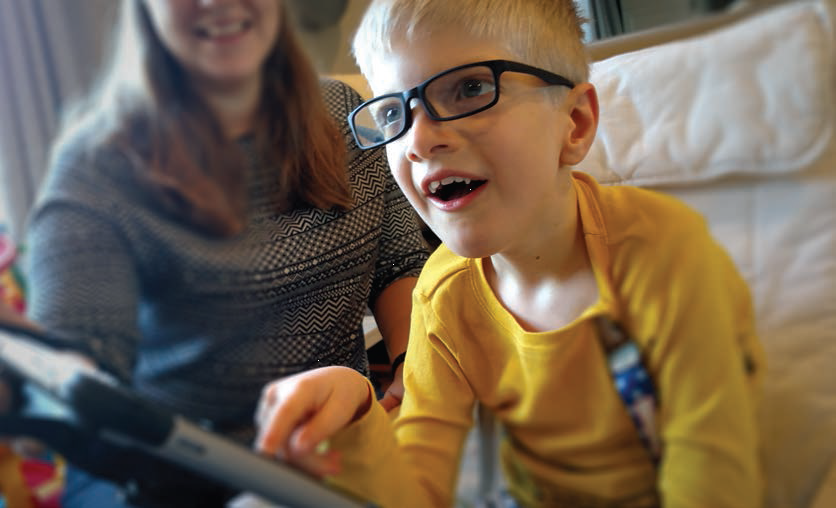 deserved a ‘real’ voice. We knew he had things to say, things he wanted us to know about him. And when he was sick, we wanted to understand what was wrong so we could help him feel better.”

Before Parker was matched with the NOVA chat, she recalls, “We had tried it all. We had Big Mac Buttons, communication cards, charts, and binders. We did PECS. We tried sign language. We moved on to the iPad and tried many different apps. We tried the GoTalk. They all worked with minimum success and they were exhausting. The reality was, I was often taking care of a very sick child and I really didn't want to carry around a binder, necklace, chart, or large device.”

Two years ago, Parker’s long-time SLP referred the Schuellers to Pat Nizio, an AAC expert and SLP at Beaumont Children's Hospital in Royal Oak, MI.  Most of Nizio’s clients have significant disabilities including medical/physical, gross and fine motor, and sensory and vision challenges.

“Because Parker has so many medical and physical needs, we presented vocabulary arranged according to important pragmatic functions,” Nizio recalls. “We used the support provided by sentence starters and pages which were linked to additional relevant vocabulary -- ‘I need’ and ‘something hurts me,’ for example. As he learned to express utterances that related to his basic and physical needs, we were able to rapidly introduce vocabulary according to a core word approach, balanced with motivating fringe vocabulary.”

Nizio considers Parker’s family an “active, integral part of the treatment team” and critical to Parker’s ability to meet his communication goals,” she explains. “At least one member of Parker’s family and immediate caregivers is present throughout all treatment sessions. They helped us learn to recognize his physical signals that were indicative of discomfort or pain, and then we were able to model and reinforce vocabulary that would let him express his physical feelings. Having that immediate feedback from the family was invaluable, particularly when treatment was initiated.

“Due to his multiple medical diagnoses, Parker sometimes has difficulty being well enough to participate in treatment activities,” Nizio adds. “Even on a day when Parker might have been more fatigued or uncomfortable, we were able to use the time to discuss and demonstrate communication activities to use at home to reinforce and strengthen the skills we might not have been able to fully address.”

Nizio says working with Parker “been a very rewarding experience because his family has become wonderful advocates for his AAC needs as well as for the importance of AAC to others in the community!”

Nikki marvels at the progress her son has made with his AAC device. “When we first started on it, Parker did not have the strength to lift his arm and control his finger to hit the buttons. It's incredible how well he communicates now with the device. The other day, we had a completely fluid conversation after his horse therapy. He said he liked it, told me he rode a horse, thanked the therapist and told her he loved her, and that he wanted to go and get a smoothie. It's really unbelievable.”

Her most heartwarming moment to date, she shares, “was when I dropped him off at speech therapy one day, and as I walked through the door to leave, I heard ‘I love you’ from the NOVA chat. I cried all the way home.”

Challenges and Successes at School and Home

An educator herself, Nikki believes there is an

overall lack of knowledge and understanding about AAC devices in many school systems. School has been a struggle for Parker, she states, “because there has not been buy-in to using the device. It's been hard to get some educators to get the extra training to learn the device and how it’s used. But the only way Parker will get better at using the device is if it’s used consistently by everyone in his life. Our current school OT and SLP have really made an effort to use the device with Parker and it made a big difference.”

At home, the NOVA chat has “impacted everything,” she says. “I can now talk to my child. I can find out what his wants and needs are. He can tell me if he is hurting, that he wants to swing, or that he would prefer to go on a bike ride over a walk. I can't imagine a world without this device.”

Adapting to the demands of raising a child with disabilities is a process, she says. “Most days are a blur of blending the best diet possible to go through his tube, pulling and administering meds and supplements, doing all dressing and bathing and shuffling to school, therapy, etc. We rarely get breaks; we work from sunup to sundown and are often up multiple times at night.  Parker is so complex and he deserves the best life possible. To rectify those two truths requires an unbelievable amount of teamwork, dedication, and love—lots of love. But I feel lucky because he is such a gentle, easy, loving soul. Witnessing a day when he is feeling well and happy is worth every second of time and effort.”

Advice for SLPs and Parents

Nizio encourages her colleagues to “presume competence and be patient” when working with a child who has communication disabilities. “Learn to observe and listen to all the ways the child communicates and make the family an active, integral part of the treatment team.”

Nikki advises parents of children with communication disorders to “quickly find a professional who can help you match the right speech system for your child. Our SLP has changed our life because of her expertise in this area.” And while learning how to use a new device can be overwhelming at first, she promises that putting in the “time, practice, and patience” will pay off in the long run.

But Nikki also understands the emotional challenges of having a nonverbal child. “There are days where all I want is to hear Parker’s voice,” she admits.  “I just want to hear him say ‘mom.’ Hear him say ‘I love you,’ or ‘my stomach hurts.’ Sometimes, I don't want to have to use a computer to talk to my son.

“But most days,” she continues, “I am grateful for the opportunity the NOVA chat has given us. It took time, but we truly don't leave home without it. It is Parker’s voice, and it's part of the family. I feel lucky that we were able to match Parker with the right device – and therapist – so early in his life. I know this is only the beginning of what he will learn and be able to tell us and I can't wait to find out what he has to say!”